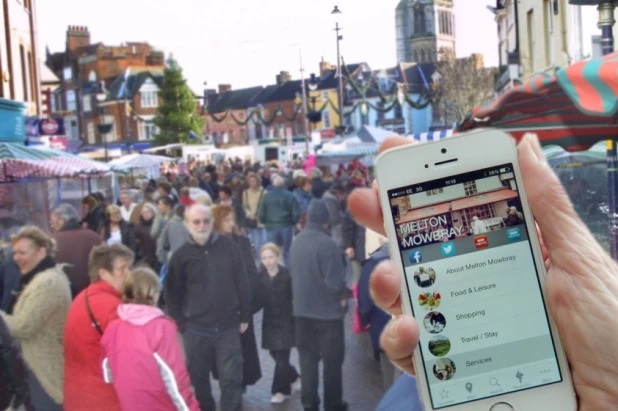 The Melton Town Guide App which was launched last year and provides a wealth of information at visitors’ fingertips, is just one of the initiatives which has been supported by the Melton BID

A new night bus service is to be piloted in Melton as part of efforts to boost the town’s night-time economy.

Details of the two-month scheme, to be launched later this year, were revealed yesterday (Wednesday) as town centre businesses and policy-makers came together to give their input into a new five-year business plan being drawn up by the Melton Mowbray Business Improvement District (BID).

The Melton BID is an organisation which seeks to enhance the vitality of the town centre, raising its profile as a tourist and shopping destination, as well as reducing business costs and supporting businesses through various schemes.

Later this year, all of the 443 businesses which are within the BID boundary area will be asked to vote on whether or not to renew the BID for a second term. It’s claimed the renewal of the BID will generate £750,000 to invest in Melton town centre over the next five years.

The results of a survey open to all BID businesses showed that 68 per cent of businesses felt the Melton BID represented good value for money and almost 60 per cent of respondents felt the BID’s performance was ‘good’ or ‘excellent’.

The BID is funded by businesses within its boundary area paying a one-and-a-half per cent levy of their rateable value. Those with a rateable value of £6,999 and under pay a £100 levy per year.

This money can only be spent within the BID area on projects and services agreed and voted upon within a business plan.

A cross section of about 40 town centre businesses were represented at yesterday’s ‘Melton Town Visioning Event’ to discuss which priorities and projects they want to be included in the Melton BID’s new business plan.

Fairer car parking charges (it is currently more expensive to park on Tuesdays) and car parking offers such as the ‘free after three’ initiative, encouraging more people to visit the town centre, were among the top priorities mentioned.

Supporting existing big crowd-pulling events in Melton, such as the Victorian Christmas Fayre, and introducing new town centre attractions such as a music festival, comedy events and an open air theatre were among the most popular suggestions to attract visitors to the town centre.

In terms of existing initiatives supported by the Melton BID, the free trade recycling scheme ranked as being the most important.

A whole range of other issues impacting upon the fortunes of the town centre were brought up at yesterday’s meeting including the need for a bypass to tackle the town’s chronic traffic problems, a need to improve quality evening dining in the town centre, and potentially making better use of the Bell Shopping Centre and Mall Shopping Centre.

One of the key goals is to improve footfall in the town centre. Data collected for the Market Place area of the town centre has shown a 15 per cent drop (February 2015-2016). The busiest footfall day was found to be Saturday, peaking between 11am and 2pm.

BID manager Shelagh Core said: “Footfall is down but it is a national trend. We have to think about how we can bring more people into the town.”

She added the views expressed by businesses at yesterday’s brainstorming event would be ‘instrumental’ in forming its next business plan.

She said: “I think the response and feedback we’ve had from the survey and yesterday’s town visioning event has been very positive overall. It’s about visioning for the next five years and beyond.

“One of the projects we’ve approved funding for is a two-month ‘night rider’ bus pilot project for the Melton town centre area, in partnership with Centrebus.

“The shuttle service will run from 7pm to midnight. Hopefully it will bring more people into the town, saving people having to drive or walk, and giving a boost to our evening economy as well as supporting organisations like the Royal British Legion and Conservative Club which have been losing members.”

Businesses which are part of the BID will be consulted before its new business plan is finalised.

You have Successfully Subscribed!